Yuts-whol-aht: Walking through the mountains. It is the indigenous name for the Beaufort Range, a series of mountains that mark the boundary between the traditional territories of the Hupačasath and Tseshaht First Nations to the southwest and the K’omoks First Nation to the northeast. The plan was to climb from Port Alberni to walk along its ridge, to the small town of Cumberland.

Steve dropped me off at the trailhead and took a picture of me before my ascent on day 10. With my bag full of food, I started the logging road that climbed steadily through the cut blocks at the base of the mountains and in the alpine. This would be my first serious elevation gain since starting my hike, and also my first time navigating the different types of terrain found up there. I was nervous and excited for the new challenge, which had fulfilled my anticipatory dreams the night before.

The road offered views here and there of lakes and farmland in the Alberni Valley, and clouds of steam rising from the town’s wood products factory. Soon I found myself on Don’s trail, leading to Mt Irwin and Mt Hal, the first two peaks of the challenge. The undergrowth thinned out and the trees became less bushy, revealing the bare red-brown soil of dirt and rotting wood. The few bushes there were had been flattened by the snow and were just beginning to offer their new leaves. This made trailless walking easier, as the ground was more even and less densely overgrown than at lower elevations. 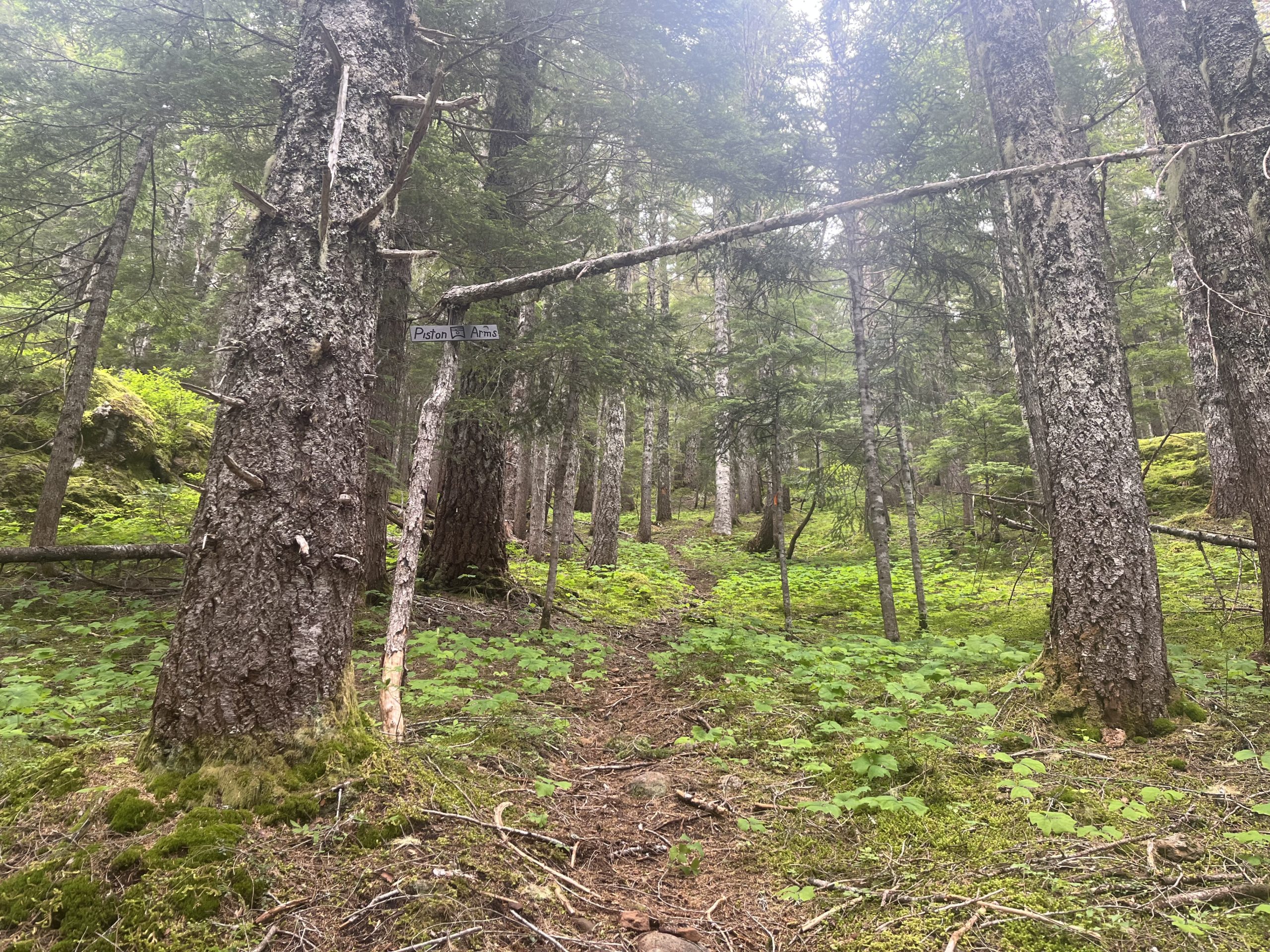 Passing near Mount Irwin, I saw my first patch of snow. I had no idea what awaited me in the future! As I sat down for a snack just below Irwin’s peak, I watched the view change and change around me with the oncoming clouds. A glimpse here, a glimpse there – never all at once. I began to think that maybe it was a good thing that he didn’t reveal himself all at once – The small fields and houses below were a dizzying distance away. It was distracting, trying to focus on your next step down the slippery slope, remembering how high I was. 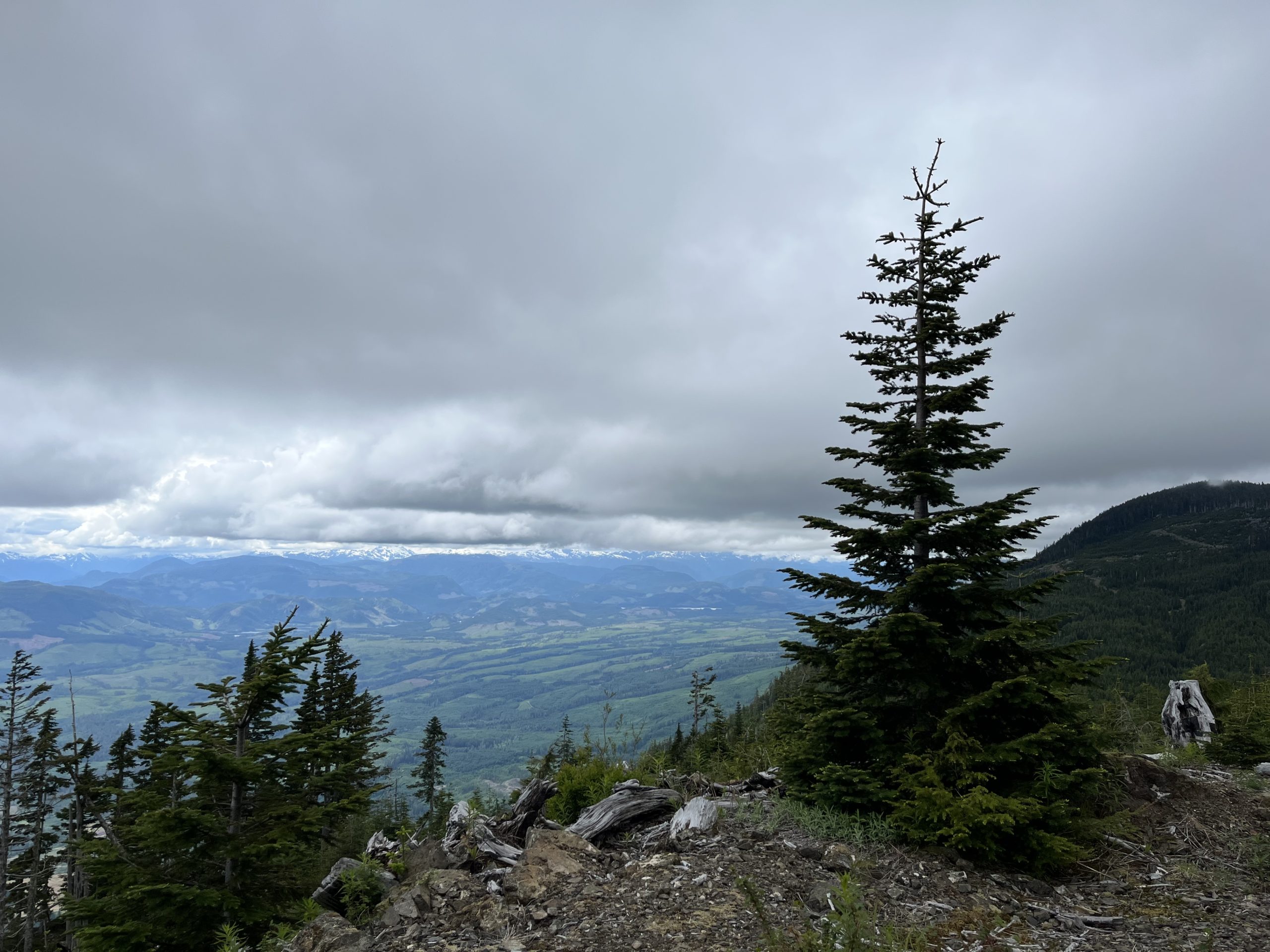 while on Mount Hal I learned to use my phone’s maps to navigate a snowy environment with no markers, no trails. Walking on snow in my hiking boots was also another learning curve – how to angle my feet so I didn’t slip when I intended to climb, and how to use my boots as skis when I wanted to descend quickly. 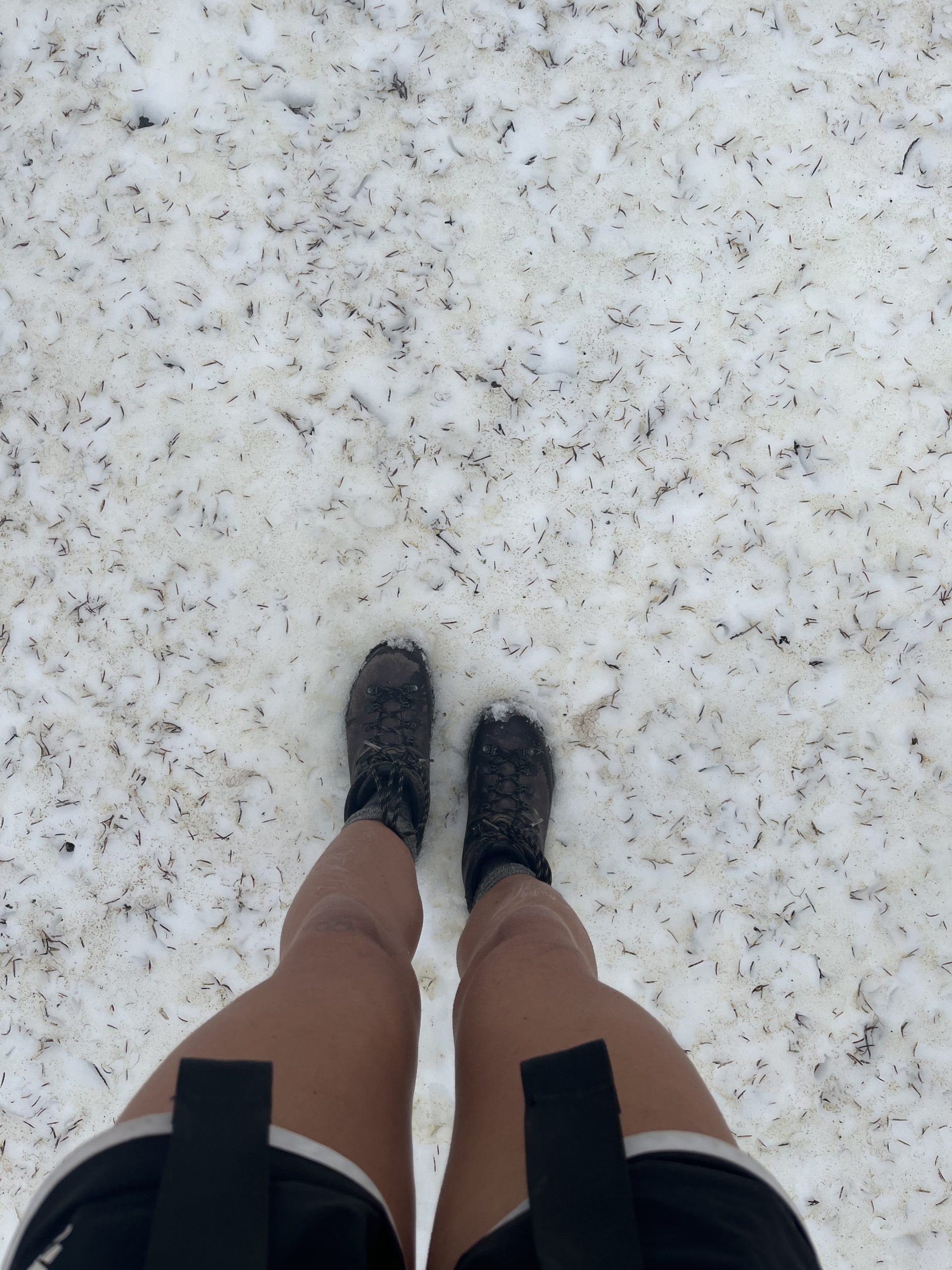 Walk in the snow

It was a long day of new experiences. exhausted, I camped under a big tree, one of the few flat places without snow that I could find. 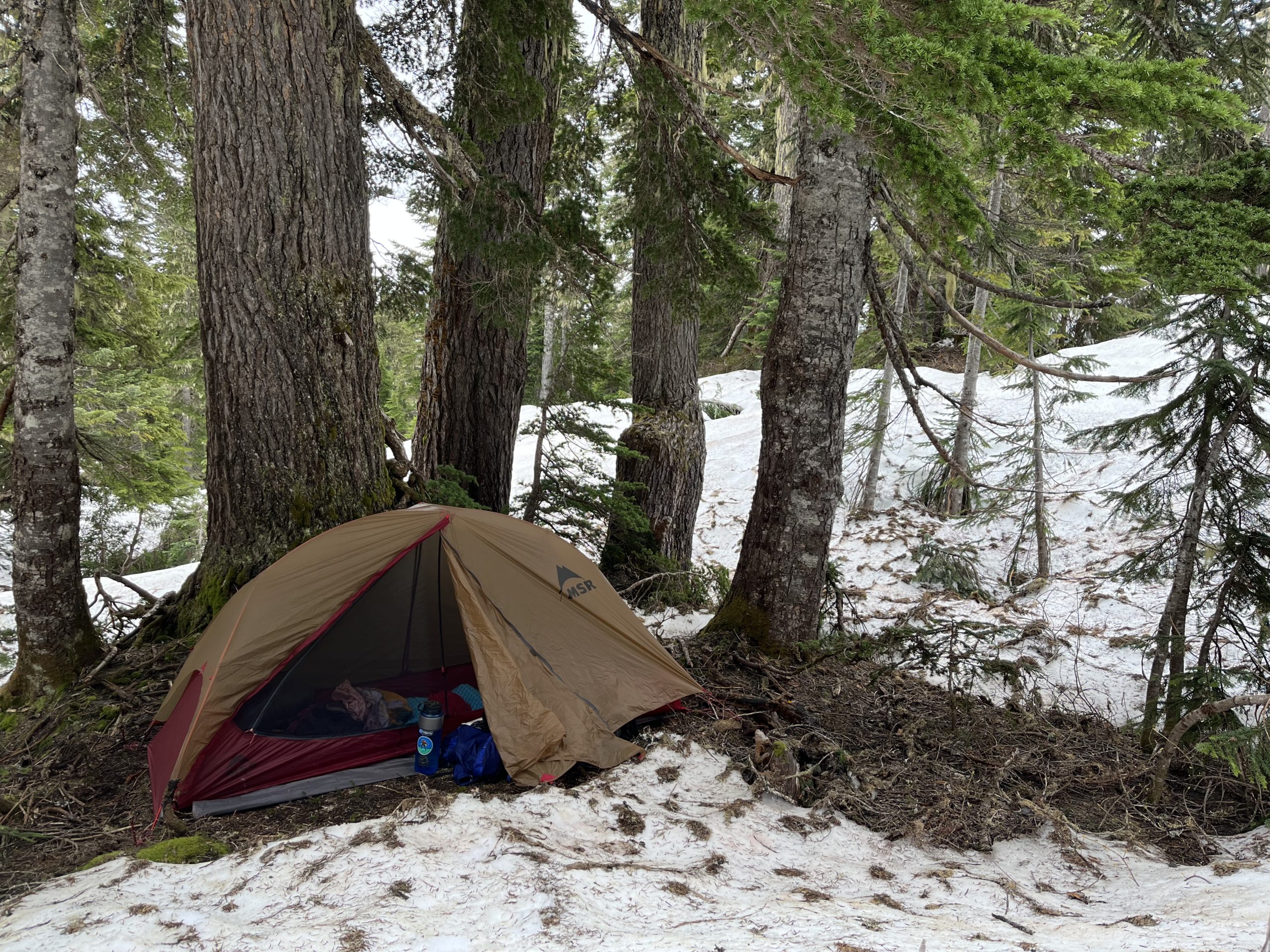 Walk in the fog

Day 11 was a long and difficult hike as I reached Mt Joan, Squarehead and Mt Apps, and ended the day with a half way ascent of Mt Cameron. I was in the clouds all day. Isolated from the world below, and never bumping into anyone (who else would come here in bad weather and snow?), it was just me in my foggy little video game: checking my phone, finding the direction you need to go , choose a landmark to aim for. Walk and repeat. 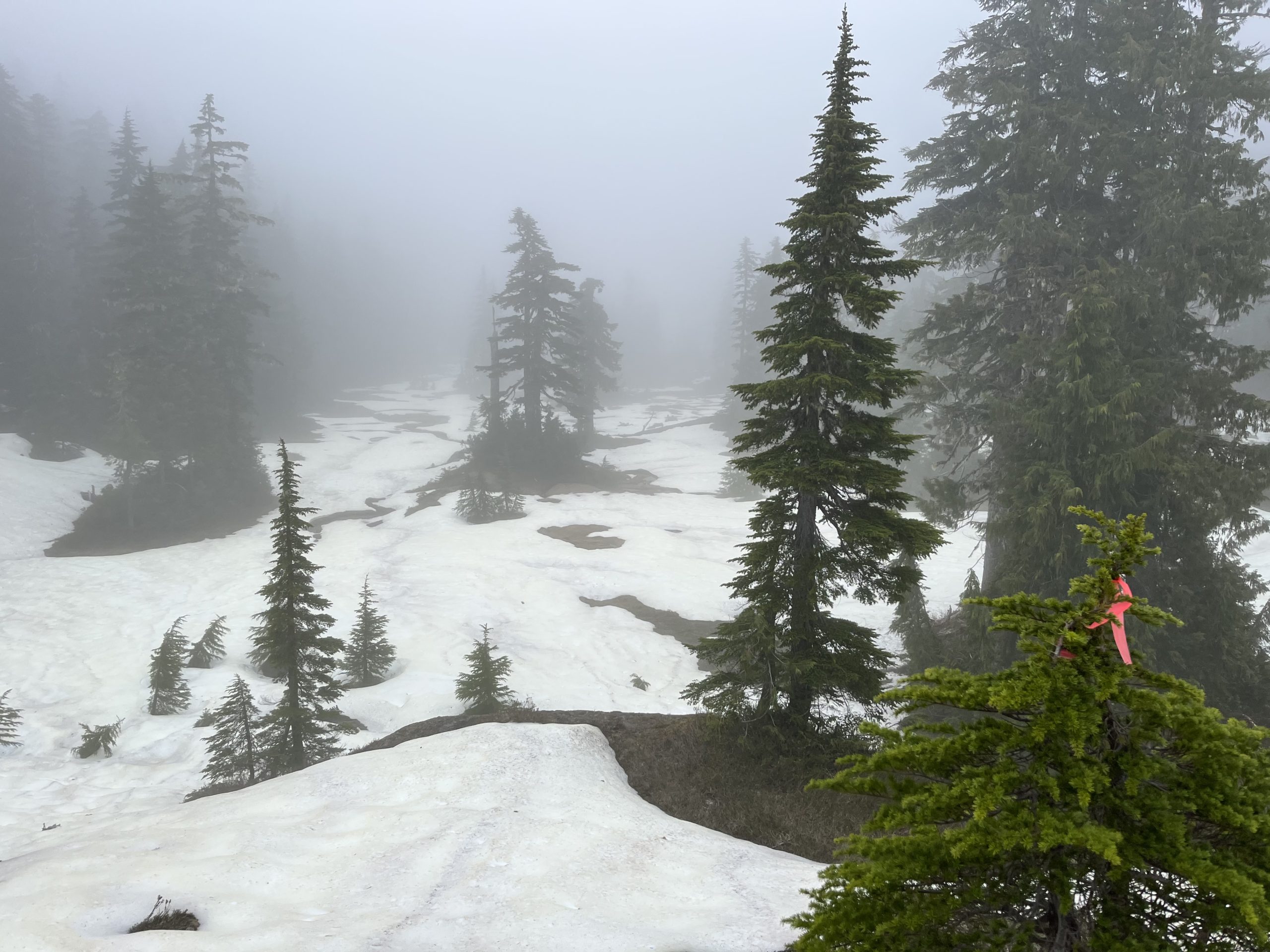 It was like the Slenderman game… if anyone remembers

Saw a few deer bouncing around in the snow and followed their tracks for a while as they lined up in my path. The low hoots of owls and the cries of birds echoed through the mist. 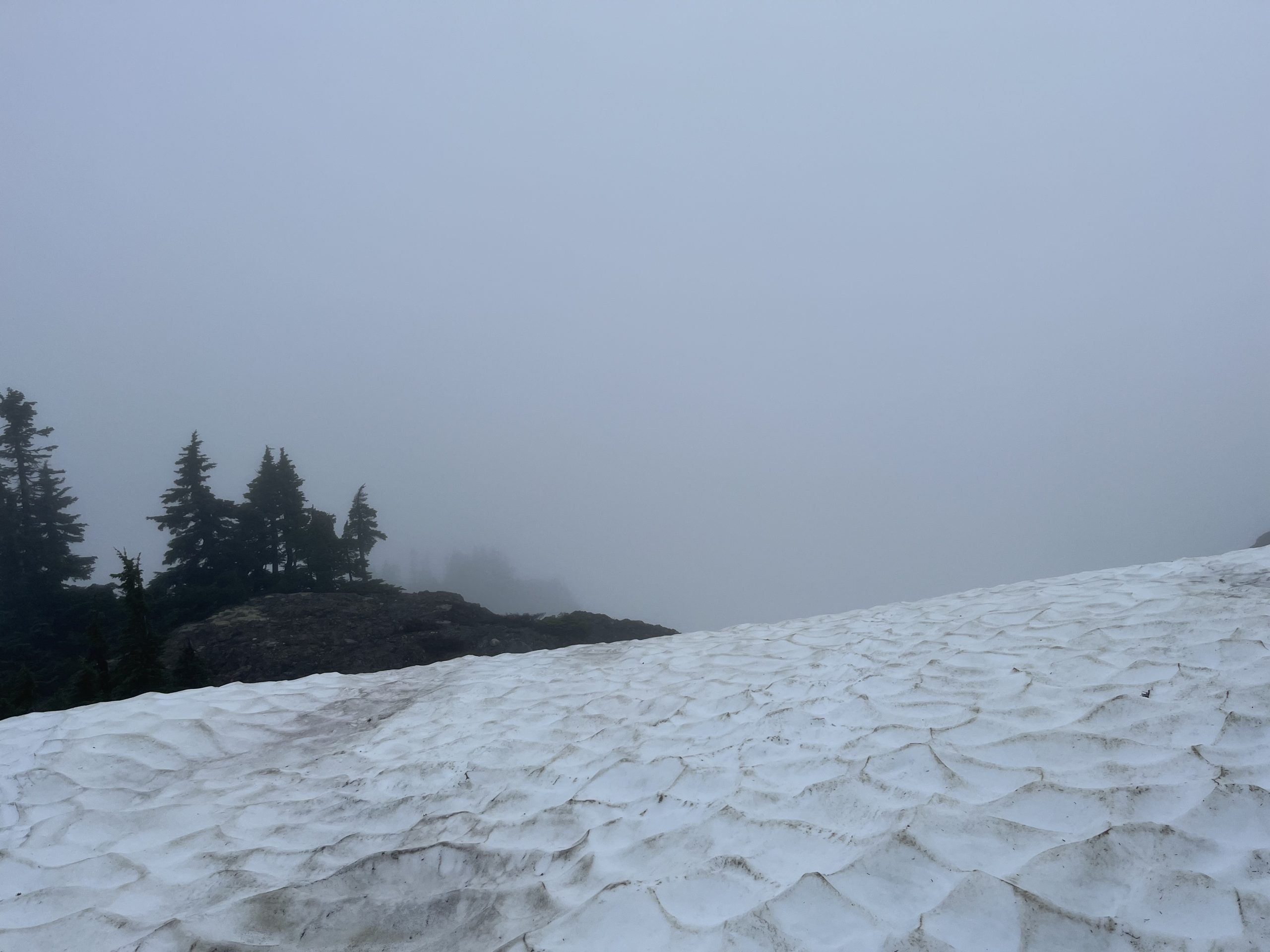 Not being able to see very far and fully trusting my GPS maps, I climbed over wet rocks and charged through groups of trees, all for the sake of that digital dotted line. Sometimes I would come to a drop off point and had to find my way to continue in the direction I needed to go. Every time I saw a trail marker, I felt relieved. For about half the day I was able to follow the markers fairly easily – but in some places where snow covered them or they were sparse it was more difficult. 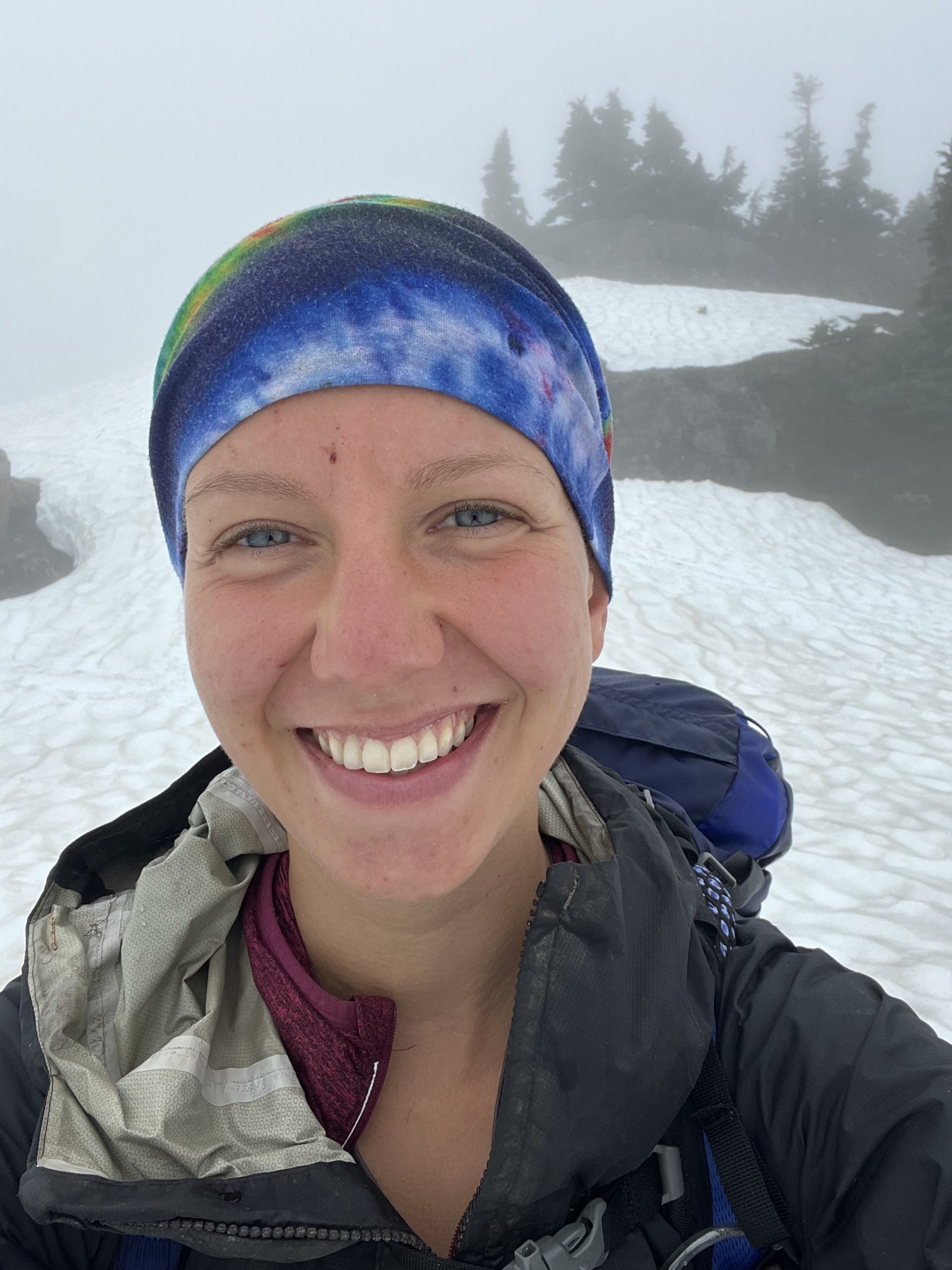 Me, I wonder what I’m doing

It was a short climb to the summit of Mount Cameron for sunrise on day 12. Finally, the views I’ve been waiting for! There was not a cloud in the sky, and the snow, tinted yellow by the pollen of the scattered trees, was softening every minute under my feet. It actually made it easier to get a foothold in the steep sections (of which there were a lot!). 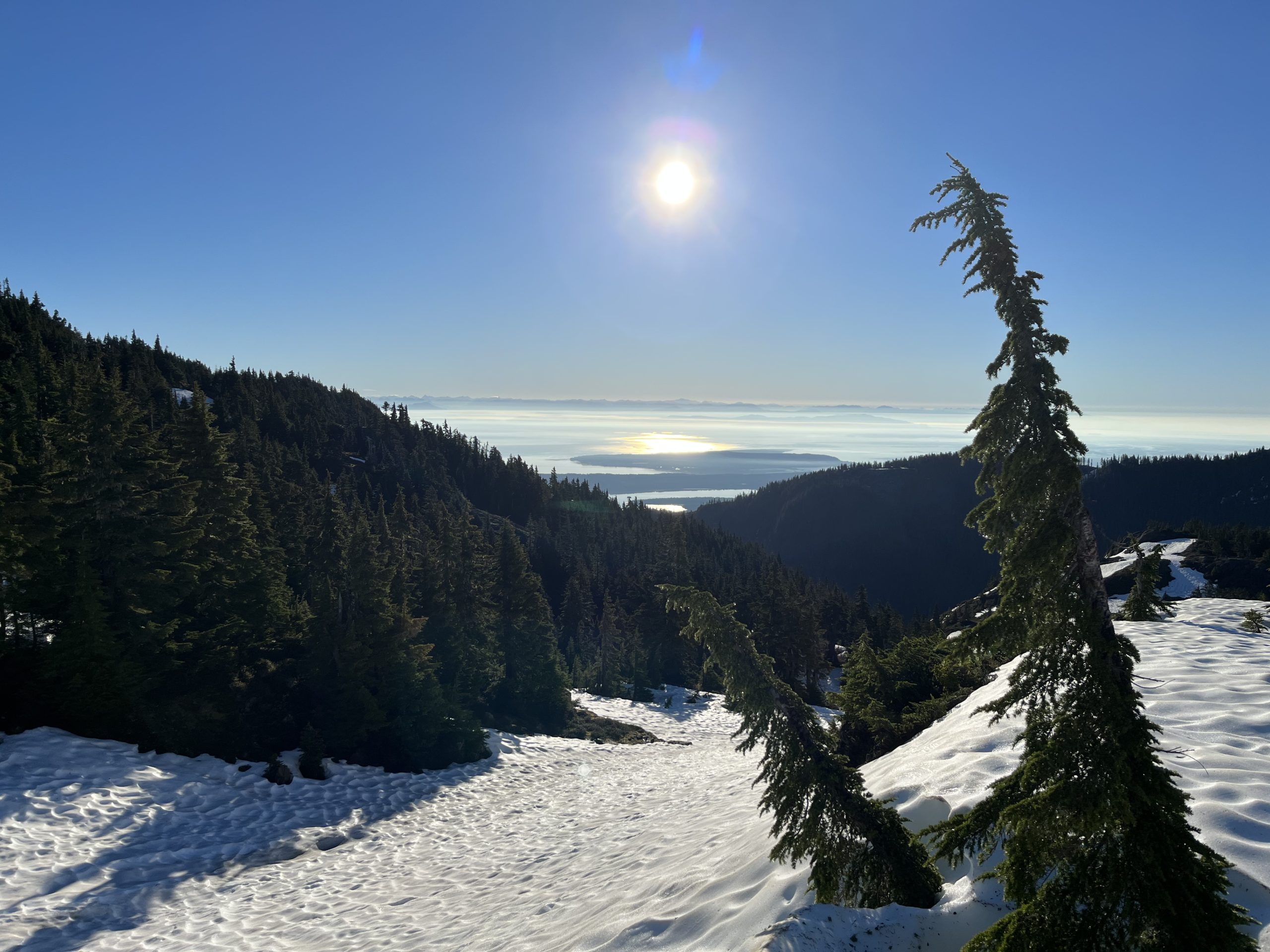 The back of Mount Cameron had some steep drop-offs. There was a fairly sketchy one which probably would have been doable when the snow had melted – but when I got to the top the ravine was filled with a wall of ice which made it difficult to descend safely. I ended up dumping my pack at the bottom and then scrambling up the rock face to the side to get down safely. 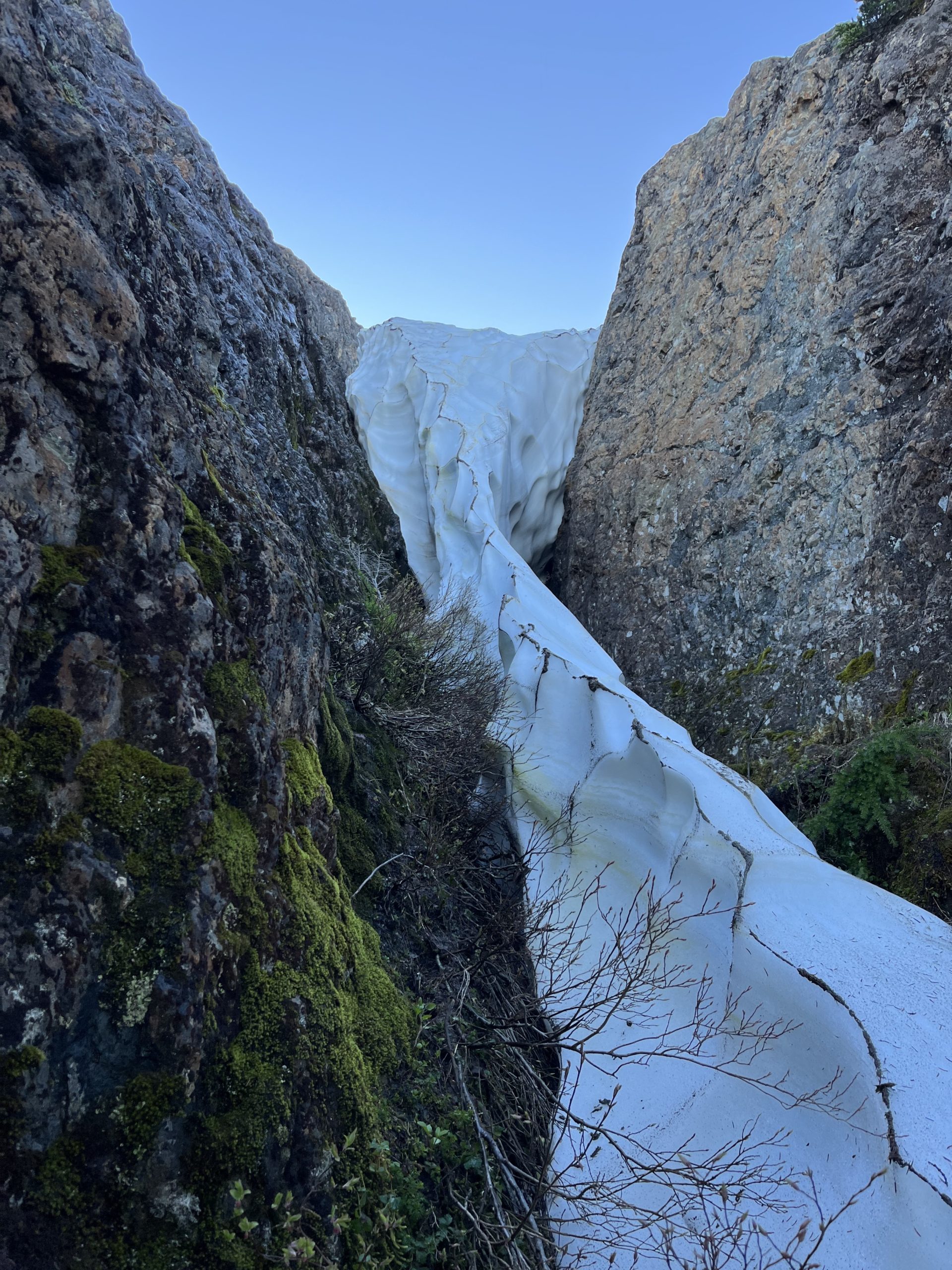 Climbing on the left side of this ravine

From Mt Cameron the markers took me steadily up to Tuesday Peak and then Mt Henry Spencer. From the top of the latter, the views were 360 ​​degrees. To the northwest, I could trace my tightrope walk perfectly with the contours of the terrain up to Mt Stubbs and Mt Tsable. I was grateful for the sunny weather, as the path to Tsable via Stubbs was unmarked – but relatively easy to figure out. I just had to stay on top of the ridge and it would take me where I needed to go. 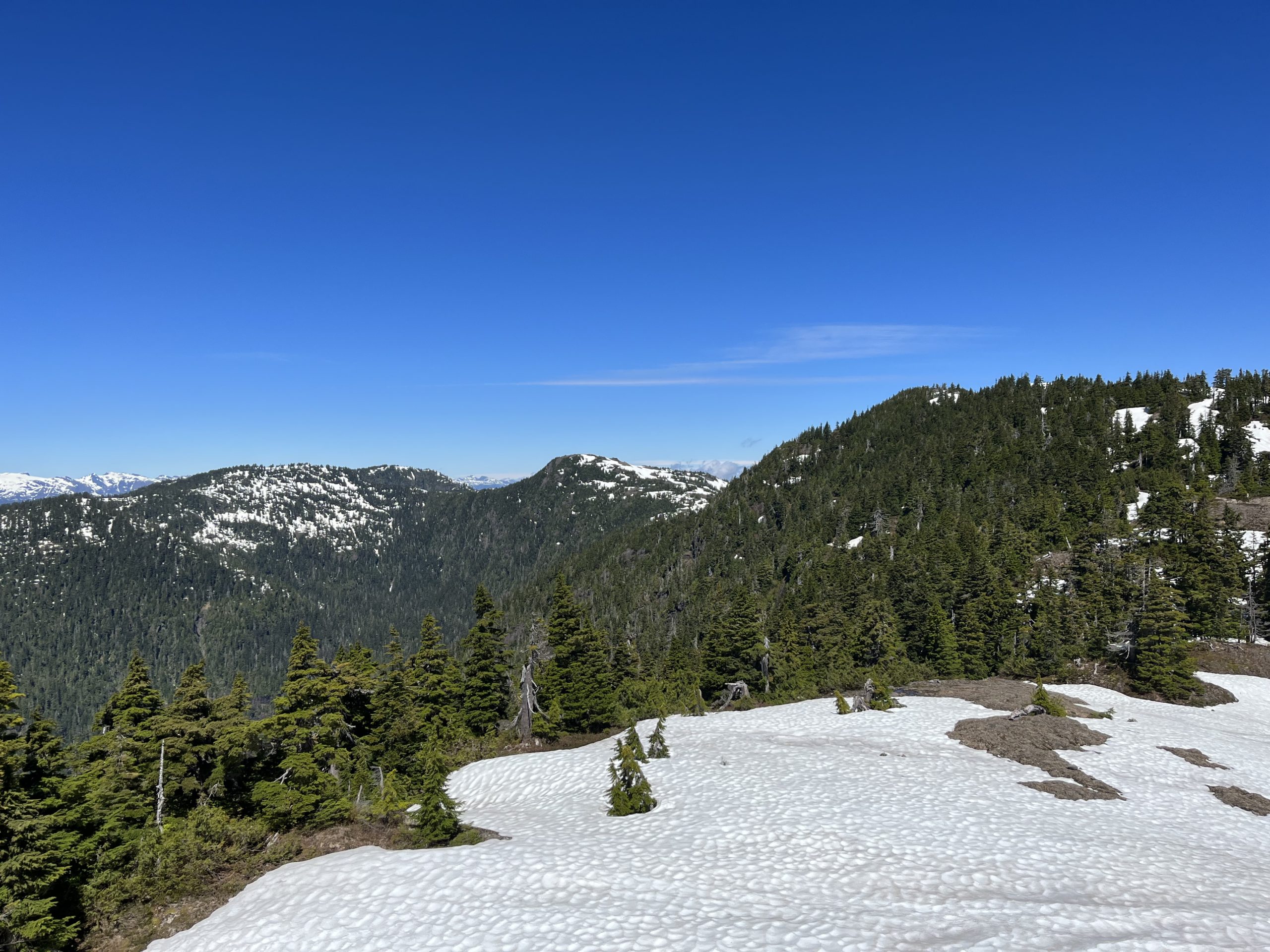 The day passed in a blur. My consciousness was fully in the present, laser focused on the next step, the next foothold, and the next handhold (if needed). I’ve adopted a kind of tunnel vision, to keep my mind on the task at hand, and avoid getting too overwhelmed with unnecessary thoughts (I’m so high! What if I fall? Look at that lake so far below What if there was a cliff on the other side of this bump?). 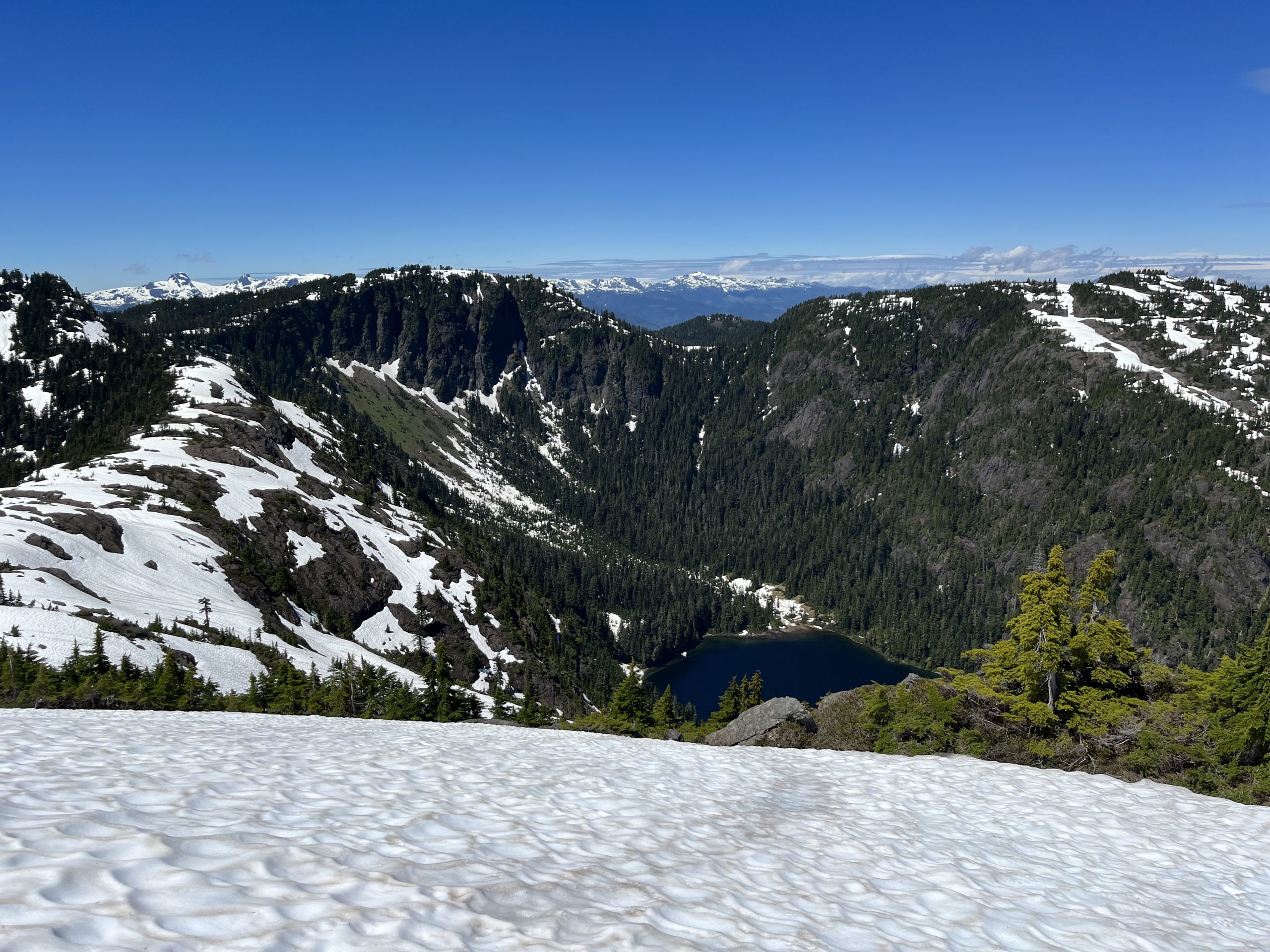 Don’t look down… hit the slopes in the snow

By the time I reached Tsable Mtn I was completely exhausted. I took a nap in the blazing afternoon sun and listened to the birds and insects buzzing. 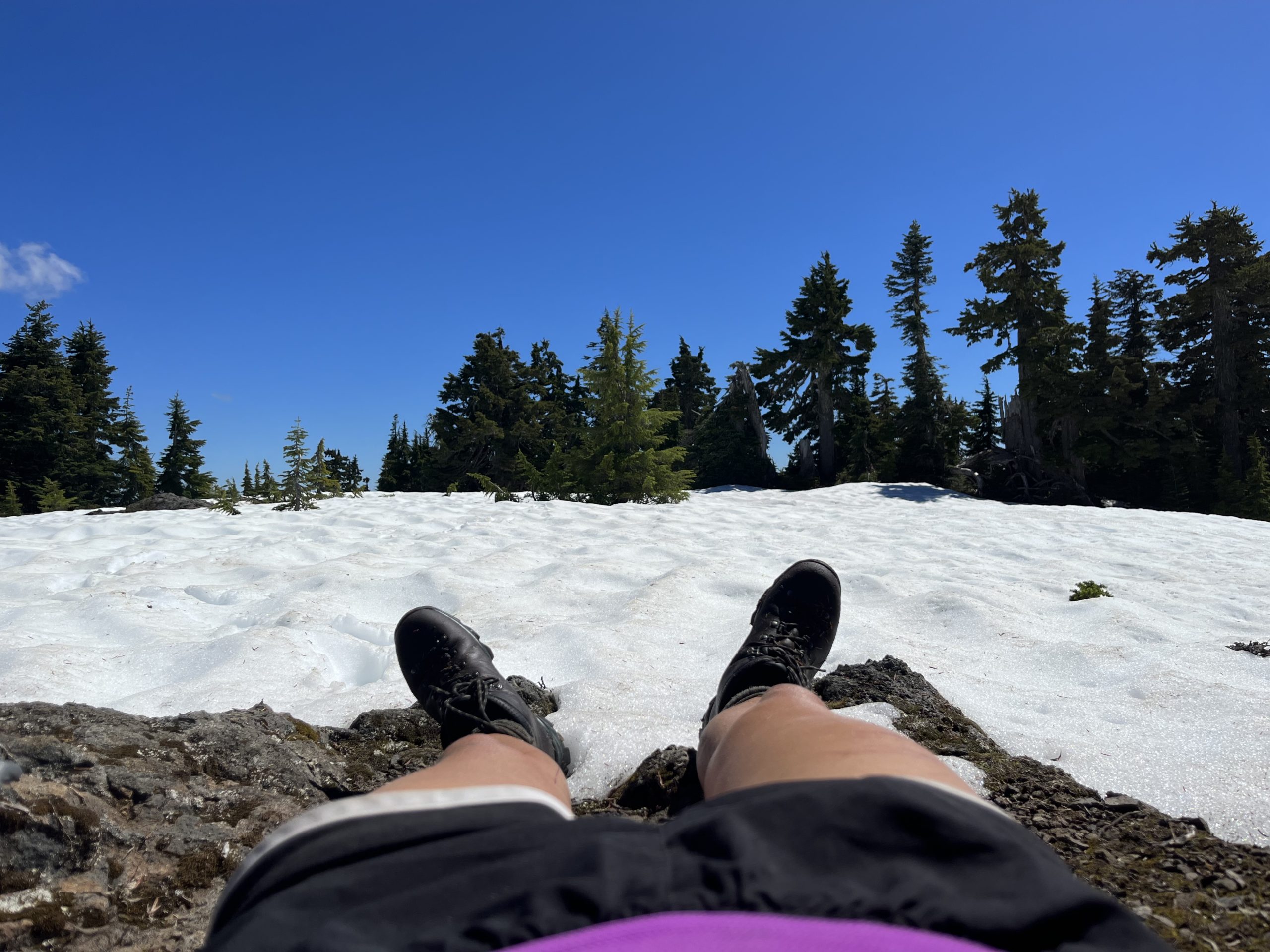 Even though it was scary at times, I’m glad I did it, I thought. As I lay weary and triumphant, I spotted Mount Baker in the distance to the southeast. What a clear day it was!

Halfway up the steep backside of Tsable I found a perfectly flat spot just the right size for my tent. It looked like someone had even cut the brush already. Thanks to whoever saved my job!

This website contains affiliate links, which means The Trek may receive a percentage of any product or service you purchase using the links in articles or advertisements. The buyer pays the same price as they otherwise would, and your purchase helps support The Trek’s ongoing goal of providing you with quality hiking advice and information. Thanks for your help!

To learn more, please visit the About This Site page.